The molten iron is now placed into another vessel, from the from the special transportation vehicle, that is called a BOS or Basic Oxygen Steelmaking vessel (called a converter) that is a special furnace to remove more impurities and melt-in some recycled steels by using calcium oxide (CaO) and compressed oxygen that is injected on and into the liquid iron. This is an oxidation chemical reaction.

The BOS is where the decision is made to make low carbon steel, medium carbon steel or high carbon steel. The BOS process has the capacity to reduce carbon to almost 0.0% (C).

Let us get back to how carbon is manipulated. Carbon to removed by the oxidation process where Oxygen O2 is blown, which is called blowing, in the BOS and captures a large portion of the 4% to 5% carbon. In fact that longer the O2 is blown in the lower the carbon content. This process can be done in less than an hour.

Sulfur and Phosphorous are two important impurities are further removed that are removed in the BOS by using left over calcium oxide (CaO) from the blast furnace. The reaction of CaO and compressed air with the liquid iron and the remaining impurities creates heat to further the reaction.

These impurities form into slag and float on the top of the liquid steel. The liquid steel is taped from the bottom and are drained off forming a primary steel or raw steel into a special vehicle looking like a rail car with a big bowl or ladle (equipped with electrodes for heat) for making steel to specification for final end usage and this also where alloying takes place.

In the rail car with the ladle, the primary steel is still very-very hot. Here is where Manganese (Mn), Silicon (Si), including more carbon to increase or refine the level of carbon content, Cr (Chromium) for stainless steel, and to add other alloys like Copper (Cu). This steel can be further refined by adding Aluminum is to remove O2 that was trapped or left behind from the BOS making process and is done as follows -

Another way of removing the left over O2 is to shake the ladle while under a vacuum. This is called degassing. Both of these are specified by rimmed steel, semi-killed steel or killed steel. Where killed steel refers to the removal of all oxygen that could react with carbon once the steel is in plate form or solid form. Semi-killed is where the oxygen is not completely removed in that when cooling to a solid there is CO degassing of the ingot that benefits the ingot by minimizing ingot shrinkage. Rimming is similar to semi-killed steel except that the CO degassing occurs during the enter solidification process of the ingot such that there are not gas bubbles or porosity.

Another way of making secondary steel is by using 100% recycled steel. This is done in an Electric Arc Furnace. 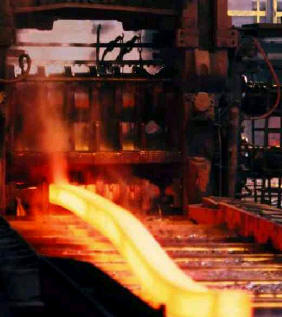 Next the steel is processed in to a ingot or casted. The difference between the two is ingot is a batch process of a very large piece of steel.

The caster is a continuous casting process that makes very long slabs, blooms, and billets. These are made on a caster machine that forms the molten steel as it flows down the caster machine slowly cooling and cut in long lengths.

The ingot process is the oldest form of secondary steel making. There will be greater varieties in the metallurgical properties in the ingot.

Next Microscopic Structure of Carbon Steel

Metals are made up of very small building blocks that are called grains or crystals. These building blocks are stacked tightly. The size of these grains (like wood grains for the carpenter or cells for the biologist) is very small and normally are around 0.1-mm to 0.01-mm. In a piece of carbon steel can have population of 1000-crystals per inch.

Each grain in steel represents a location, in the steel slab/bloom, billet, etcetera, that froze at the same time like ice crystals in the metal solid. There are billions and billions of then in a small piece of steel. When the metal freezes to a solid they all form and grow at the same time and stop growing when they meet each other at the grain boundary.